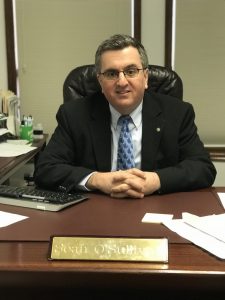 Sean P. O’Sullivan, Esq, is an attorney admitted to practice law before the Courts of the State of NY, as well as the US District Courts for the Southern District of NY and Eastern District  of NY.  Sean is the President and Sole Member of Law Office of Sean P. O’Sullivan, PLLC, a law firm located in the New Dorp Section of Staten Island.  The firm was established in February 2002.  The firm is a general practice firm with a high concentration on real estate and real estate related matters (landlord tenant, foreclosure issues), and wills, estates and trusts.

Sean served as a member of the Board of Directors of the NYS Chapter of the March of Dimes Staten Island Division from March 2008 thru March 2016.  Sean became Chairperson of the SI Division on January 1, 2015 (The first new Chair in over 17 years).  He served for 1 year as the Vice Chair and 4 years as the Treasurer.   Sean also served on the NYS Chapter Finance Committee.  Sean has been a volunteer with the March of Dimes since he was a student in high school having served on most of its event committees.  He was also a staff member of the Staten Island Division.

Sean is a founding Director and Treasurer of the NY District Circle K Alumni Foundation, Inc., an organization of former members of Circle K (the Kiwanis college program) organized to support Circle K and its members and founding Director and Treasurer of the Angels Circle Charitable Foundation, Inc., an organization founded to maintain a memorial park in honor of the Staten Islanders who died on 9-11.

Sean is a past board member of the LaPiedra Family Firefighters Fund.  He also served on the Community School District 31 Board from 1999-2002 where he was elected to serve as Secretary-Treasurer

Sean is a life long resident of Staten Island.